I went to dinner tonight with "the seven." I had six close friends in high school that I did so many crazy/fun things with and we have tried to stay in touch over the years...and we have found that a great way to "stay in touch" is to eat at Brick Oven in Provo! We go there almost every Christmas season and any other time all seven of us can arrange it. Seven years and seven children later we are still having a blast together. Dinner with our children is always an adventure, but it doesn't even compare with the time we all dressed up as a different holiday and stood on State Street and waved to the cars, or when we duct taped Kristi and left her on Coach Rehrer's doorstep, or when we would make a trip out to "the ark" (a big ship some man was building out in American Fork) and dared someone to go inside, or our senior trip to St. George that is almost entirely on video tape... 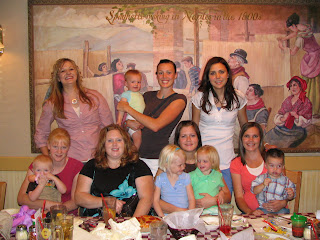 Jansen has been having a great time with his cousin Kyle. Kyle is just a few weeks younger than Jansen---it's so fun to get them together. These first two pictures were taken at Nate's dad's house. Jansen really wanted Kyle to sit by him on the swing, but once we tried it he changed his mind. 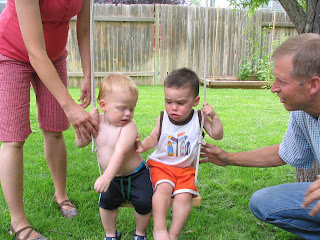 This was so funny. Jansen and Kyle were running across the room to grandpa, but each time before they started Jansen would babble something to Kyle and Kyle would say, "Yeah," and then they would take off. This is Jansen talking to Kyle. 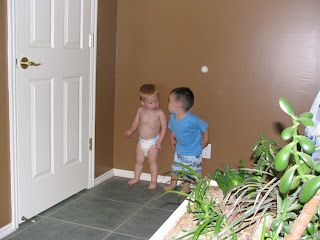 These next few pictures were taken at my cousin's house. She had a really fun backyard party for the kids...complete with water slide and all. (I'll include some pictures of that soon!) 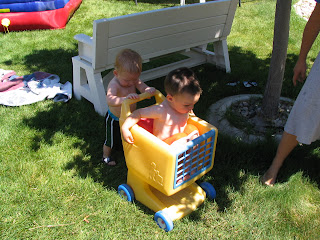 Jansen started to get mad in this picture because Kyle was pouring sand on his foot. He (Jansen) is such a stinker sometimes. 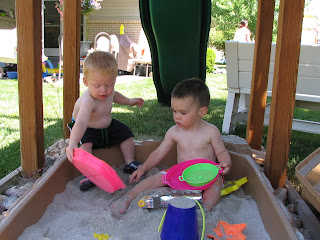 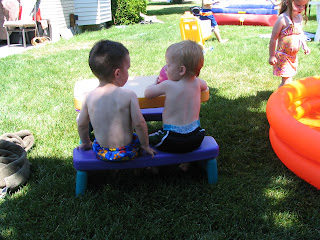 They both LOVE pizza! 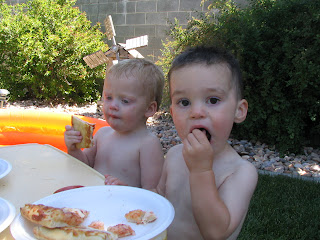 It seems that I underestimated my mother's computer and it is quite easy to blog and even post pictures on it. Hooray! We had such a great time in ID and when I have access to the pictures we took (they are on Nate's laptop and he is in Texas) I will post them.
Jansen has discovered the Push-Up. Here are some pictures of him destroying while enjoying a Scooby Doo Push-Up Pop. They are so artificially flavored that they don't even taste good...and I am not real picky about my sweets...but he sure seems to like them. We are having a great time here in Utah. It's so hot! But there are lots of things to do to help us cool off. Enjoy these adorable pictures! 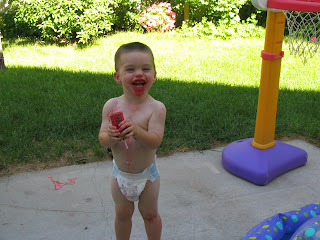 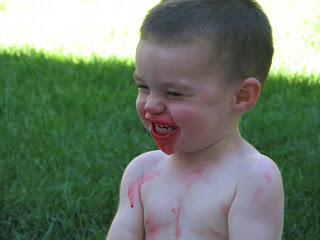 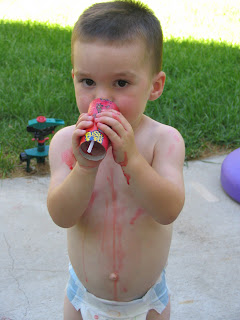 As I mentioned before, Nate, Jansen, and I are heading out of town. Tomorrow we fly to Idaho to celebrate his grandparent's 50th wedding anniversary...from there I will head to Utah and he will go to Texas. I'm not sure if I will be posting stuff on the blog when I am out there or not...I'll just have to see! My mom's computer doesn't have the best reputation.
Posted by Unknown at 9:28 PM 3 comments:

I added a link on my blog...if you look to the right of this page, below the blog archive, there is a link to my Dropshots account. This is where I put all the pictures that I take. So for those of you that look at my Dropshots account AND the blog (which is probably just faithful grandmas and bored friends) hopefully this will make it easier. And just a little tidbit...Jansen started saying the word "opposite" today. It's from a book that we read with him. He says it almost perfectly...which is more than I can say about most of the other words he says! Hope everyone is having a great Monday!
Posted by Unknown at 8:33 PM 2 comments:

While Dad Was Away...

After Nate finished his last test on Thursday, I had visions of all the fun things we would do together until we leave for Idaho next week. So far...he's been at work pretty much nonstop for the past 48 hours. Poor guy. He comes home and gets a few hours of sleep and then it's off again! So this morning Jansen and I took a little outing without him (and missed him very much!) A little after 9 we headed out to the park with a bucket, a bug jar, some banana bread, water, and the camera with high hopes of gathering lots of rocks and then throwing them in the water. 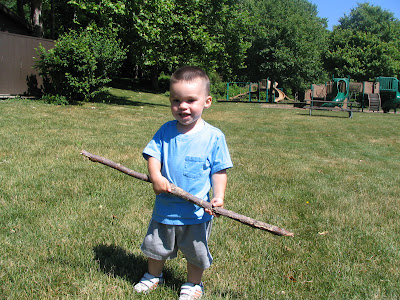 As Theodore Roosevelt said, "Speak softly and carry a big stick, you will go far." We are still working on the speak softly part. 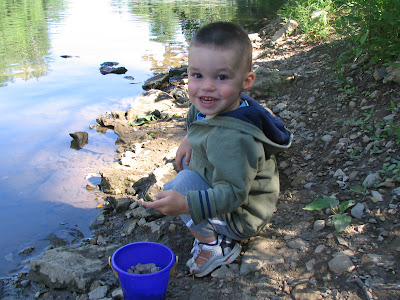 We've captured a few really cute smiles on camera lately...and that's because I say a line from Cars to him and he smiles really big and then I hurry and take the picture! We'll see how long this lasts! 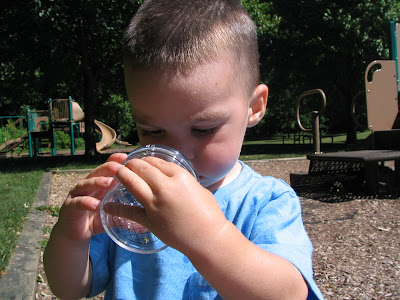 He makes some really funny sounds in this video.

I am SOOO done with Canada Geese. (Just so you know, that IS their real name. Early in our marriage Nate made sure that I knew that they are NOT Canadian Geese. They are Canada Geese.) The picture below is a typical scene outside our apartment window. Many of you are thinking, "Cute!" or "Fun!" And it was. Until about the 500th time they congregated in front of our apartment and hissed at me when I tried to get to my front door. They open their little mouths and this repulsive pink tongue hisses at me just like a snake would do. And then they run at me...I guess they think I want to kidnap their precious goslings. I counted 51 of them in a small area of our apartment complex the other day. And they leave messes all over the sidewalk. This especially becomes an issue when you have a toddler who scoots his bike along the above mentioned sidewalks and has learned to go around the poop but inevitably runs over some. And we aren't allowed to leave his bike outside. So it comes in the house. Gross. Needless to say, I am excited to move.
Disclaimer: we ARE a bird loving family. But there is a line. And the geese have crossed that line and pooped all over it. But don't worry, Jansen still loves them.

I know, I know. I need to get a little more creative with my blog titles. Nate and I were picking up some boxes from his work so that we can start packing and there were two really big ones in the pile. We kind of knew that they would be useless for packing...too big...but we both have some great memories of playing in BIG boxes when we were kids so we thought we'd bring them home anyway. I think I even remember rolling down a hill in a refrigerator box...I may be making that up. Can anyone verify that memory for me? Jansen's favorite thing is to have me crawl in first and then he comes and sits on my lap. Sometimes I need a little help getting out. The boxes have been a fun addition to the apartment! 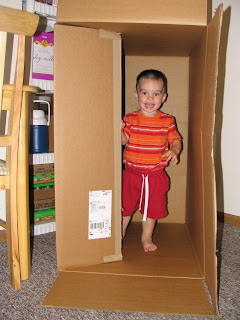 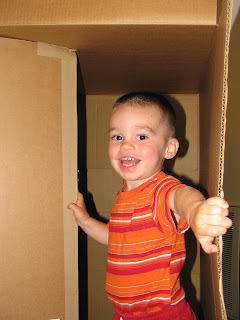 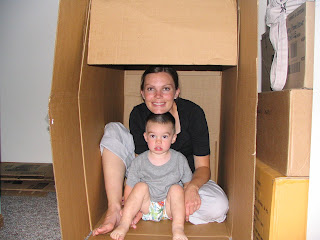 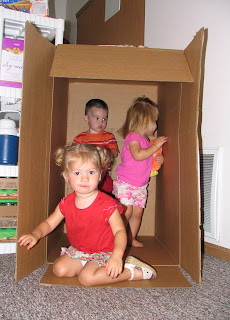 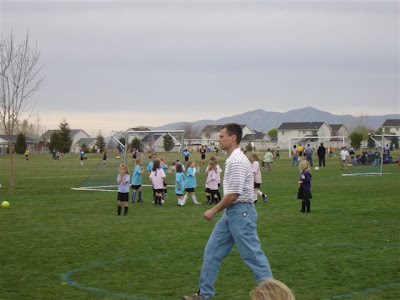 I couldn't resist putting this in the blog. Far, far away in Orem, UT, my cousin took this picture of what is believed to be Nate in 10 years. I have to agree...especially in this particular photo, that they do look a lot alike. There is even something frighteningly familiar about the way he's walking. They say we all have a twin out there somewhere...and I just so happen to have a photo of mine as well: 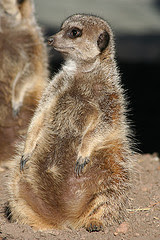